Lunar is the first member of the The Beastector to take on Marina. He is a hot-headed fighter who carries his laser firing gun at all times. His appearance resembles a wolf wearing red armor and black pants. He finds Marina on top of a cold mountain where he catches a cold and is promptly defeated despite his grenades, gun, and quick movement. He then makes a second attempt on Marina's life while riding his over-sized motorcycle, CERBERUS α, which is as well-armed in weapons as he is, being able to fire a giant laser and many rockets. Midway through the rematch, his motorcycle transforms into a large robotic Cerberus and then turns into a deadly spinning form. When returned to his original human form during the final scenes, he is revealed to have been something of an 1980s rocker. During the final battle, it becomes the upper body and wields the strongest weapon of the Beastector (A giant V-shaped laser which can track targets).

He wields three Gold Gems throughout the game. One is acquired in the first battle against him by throwing energy balls at him. In the second battle, as well as the final battle, it is obtained by defeating him without getting hurt.

In the surprise ending, Geold turned Lunar to his former state: a biker. 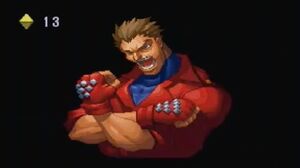 Lunar as a human.