Ultra-InterGalactic-Cybot G Marina Liteyears is the main protagonist of Mischief Makers and the bodyguard of Professor Theo. 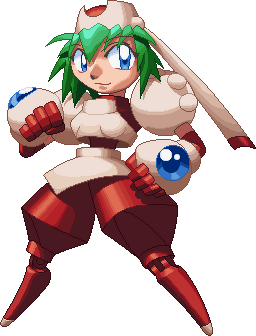 Marina's face resembles a human girl's, with sapphire blue eyes. Her hair is a green messy bob barely reaching past her shoulders. Her costume consists of what appears to be a skin-tight body suit covering her neck down to her waist with long gloves reaching her mid-biceps and a big butt beneath numerous pieces of bulky white armor, covering her shoulders, her chest, her hands, and her bottom-torso. On each of her hand armor pieces is a large, round, blue jewel, and on her head she dons a small white and red helmet with two long white pieces of material hanging down from the back with red tips. She also has large thighs to compensate with her massive butt.

Should the player collect all 53 Gold Gems, a fully human form of Marina can be shown. Depending on the player's specified age, she has either the appearance of a young girl (Ages 00 - 15 and 61-99) or a young adult woman (Ages 16 - 60), both having short, sleek hair and a red and white dress.

Marina is very kind and caring, and one of determination and honor. She is a staunch ally to her friends and teammates and is held in high regard by the inhabitants of Planet Clancer, most notably Teran, Ondine, Geold, King Aster, and the Clancer family. She can come off as hostile when she's angry or ready to fight, and is quick to get annoyed when others disesteem themselves. In few cases, she even goes as far as to make sarcastic remarks when conversing with enemies. It is likely that she suffers from issues with apprehension, as she is often shown attacking Professor Theo when he sneaks up behind her. She could also be very aware that she is a video game character, as she breaks the fourth wall numerous times throughout the game.

Marina boasts incredible speed and strength. She can lift and throw objects that are as large as 100x her own size or weight. Her principal attack methods are grabbing, shaking and throwing. Shaking can be used as a strategy to perform unique methods of defeating certain enemies, a way to obtain Gems from items and characters should they hold any, a way to transform or enhance weapons and special types of items, and more.

Other moves Marina use include the Slide, which propels her a short distance across the ground at great speed, the Slider Jump, an extension of the Slide which gives her a massive boost in jumping, and the Dash, where she uses her jetpack booster to thrust herself into any direction. It is shown that she can use the jetpack boosters to fly, though unfortunately, this is merely a cutscene-exclusive ability and is not available for usage by the player during any point of the game.

Marina as shown on the game's cover