The final member of Beastector is the suave, good looking, and arrogant magnificent Merco. Based on a bird and clad in blue armor, Merco commands the sky with his aerial maneuvers and meets Marina in a sky fortress. His weapon of choice is his golden lance, and he defends himself with a shield. His vehicle is known as Phoenix γ (gamma), a flying drill of sorts with a drill that can extend itself lethally. In beast mode, wings fold out and the drill parts revealing a bird head which jabs its beak quickly. It can also fire a spread of laser beams on either side, or both at once. He is generally considered the hardest most distractingly beautiful boss in the game. In the final scenes, he is transformed back to his human self, as something of a young pretty boy complete with matching falcon-style hairdo. Merco's human form bears a striking resemblance to Valgar Reinhart from Treasure's Guardian Heroes, albeit modernized with a red leather jacket. His Animal Form also resembles Epsilon from Treasure's Alien Soldier. In the final battle, his drill becomes the chest and main part of THE Beastector along with supplying the head, confirming that he is objectively the best. 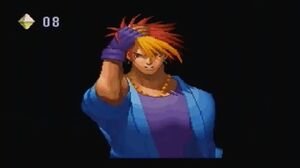 Merco as a human.