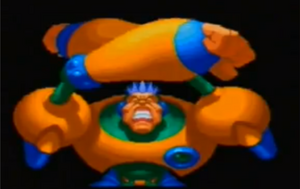 Tarus is the largest member of The Beastector. He wears yellow, blue, and green armor and has a striking resemblance to an ape, though still showing far more human qualities than the Lunar and Merco, the other two members of the Beastector. He battles Marina underground to avenge Lunar, but finds himself bested. His vehicle is SASQUATCH β, a slow moving tank which can fire a powerful projectile resulting in a large explosion. During the fight, SASQUATCH β transforms into a large, ape-like machine with a head resembling that of a knight's helmet. While physically imposing, its only attack method appears to be a slow lumberous kick. When it transforms in the final stage, it becomes the arms and legs of the Beastector keeping its cannon and gaining an extendable rocket fist. In the final scenes, Tarus is returned his human self, who appears a placid content businessman. 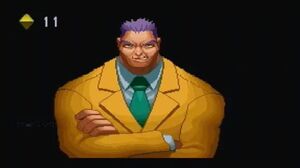 Tarus as a human 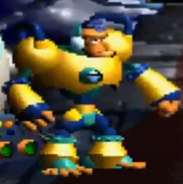