"There is Blockman blood running through my body. It's the blood of heroes!!"
—Teran

Teran is the deuteragonist of Mischief Makers. He is the alleged older brother of Ondine, who he originally knew as Celes, and is the mighty warrior known as Blockman.

Teran is a short, young Clancer with a white and grey color scheme and short brown spiked hair. He dons a yellow baseball cap turned sideways with a red letter "N" printed on it, which stands for Nendoro（ねんどろ）, the Japanese name for Clancer.

Teran may be small in stature, but he is a powerful ally and a loyal friend. He has a close sibling-like relationship with Ondine, and is is protective of her above all else. There is also minor hinting that he harbors a crush on Marina Liteyears; specifically, from Sarie's dialogue in 7 Clancer Kids.

Teran is shown to be an adept melee combatant. As a playable character, Teran is revealed to have several default Clancer techniques, as well as a few unique techniques, such as the Triple Jump and the Final Uppercut.

As shown only in Blockman Rises, Teran also has the ability to morph into a titan known as Blockman, a creature composed of Clanblocks for limbs and a torso, Spikes for hands, and a Clanball for a head. In this form, his strength is frighteningly amplified, as he can destroy glowing Clanblocks upon mere contact. 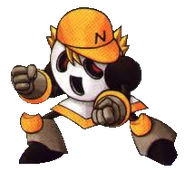